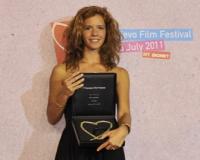 After proudly naming her "Best Actress" last year, for the part of Veli in Loverboy, Sarajevo is welcoming Ada Condeescu once again, only now to be part of a Jury.

Alongside Ada, the jury is made up by plastic artists Zelimir Baric and Marina Abramovic, director Jasmila Zbanic and philosopher Slavoj Zizek.

If you want to upload your one-minute videos, go to http://balkanspirit.creative.arte.tv/en and show your balkan spirit!