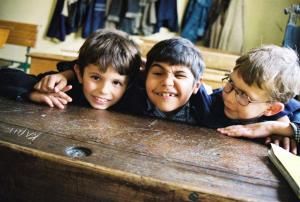 A film about a 7 year old boy who „liberated” us from Ceausescu’s regime so that his 17 year old sister could have a bright future.

Bucharest, 1989. Eva, her little brother Lalalilu and their parents live in in the outskirts of Bucharest. Lalalilu is 7 and he adores his sister.At 17, Eva is in love for the first time.Her live changes when she and her boyfriend accidentally break Ceausescu’s statue while kissing in school. They are caught and asked to apologize publicly for their deed. Obliged by his father, Alexandru does so and gets away. But Eva refuses, she gets expelled and transfers to a professional school in the outskirts. He dumps Alexandru and, together with her new friend, Andrei, she plans to leave the country. They want to pass the Danube by swimming. Knowing about her decision, Lalalilu takes an important decision.