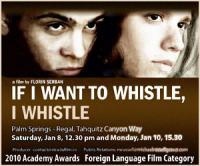 If I Want to Whistle, I Whistle has its official premiere in New York today.
Director Florin Serban and producer Daniel Mitulescu will attend the screening at Film Forum New York, starting 8 PM, and the official launching afterparty. The film will run in NY until January 18th.

If I Want to Whistle, I Whistle is Romania's official entry into this year's Oscar competition for Best Foreign Language Film.